West Godavari district is one of the 13 districts in the Indian state of Andhra Pradesh. The district is situated in Coastal Andhraregion of the state. Eluru is the administrative headquarters of the district. As of 2011 census of India, it has an area of 7,742 km2 (2,989 sq mi) and a population of 3,936,966. It is bounded by Krishna district on the west, East Godavari district on the east, Bay of Bengal on the south and the state of Telangana on the north.

Eluru was a part of the Buddhist kingdom of Vengi. The Eastern Chalukyas ruled coastal Andhra from 700 to 1200, with Vengi, near Pedavegi village, as their capital. Historical evidences are found at the villages, Pedavegi and Guntupalli (Jilakarragudem). Eluru then became a part of the Kalinga Empire until 1471. Later it fell into the hands of the Gajapathis. In 1515 Sri Krishna Deva Raya captured it. After the fall of the Vijayanagara Kingdom, it was taken by the Sultan of Golkonda, Kutub Shah. In 1925, West Godavari District was formed with Eluru as its headquarters and all the district offices and  regional offices were set up in Eluru  city.

West Godavari is a flat country with a slight eastern slope along the rivers of the district flow. The rivers in the West Godavari district generally flow from West to East. Three rivers cut through the district are Godavari, Yerrakaluva and Tammileru. Dowleswaram barrage, Eluru canal, Vijayarai Anicut, Tammileru, Jalleru and Yerrakaluva reservoirs are the source of irrigation

The region has a tropical climate similar to the rest of the Coastal Andhra region. The summers (March–June) are very hot and dry while the winters are fairly pleasant. The temperatures in the summers often rise over 50 degrees during the day. The rainy season (July–December) is often the best time for tourist visits, as fields are brilliantly green with paddy crops, rivers flowing with monsoon water, and a relatively cool climate. The region has long been home to the Indian nobles due to its climate and fertile soil, and several zamindar large mansions are scattered around the Godavari area.

As of 2011 Census of India, West Godavari district has a population of 3,936,966 with 1,091,525 households, which is the 11th most populous district in the state. The district population is approximately equals to the population of Liberia and Oregon.

Agriculture is one of the main occupation in the district with the main produce being paddy. Sugarcane, cashew nut, mango, coconut and tobacco are other important crops Apart from agriculture, the farmers also indulge in aquaculture activities, such as, pisciculture and shrimp production. Wooden Pile Carpet Industry in Eluru produces eco-friendly carpets from wool and are exported to foreign countries as well.

Culture and traditions at Kalavalapalli village in West Godavari district

Telugu is the most widely spoken language

Vedas, which has oral heritage recognition from by UNESCO are taught at Sri Venkateswara Veda Patasala of I.Bhimavaram village in the district.

There are many landmarks and tourism destinations in the district. Eluru is the largest city of the district with many destinations related to Buddhists and Archeological importance such asGuntupalli Caves near the city.  Eluru city hosts 74feet high Buddha statue in the heart of the city. 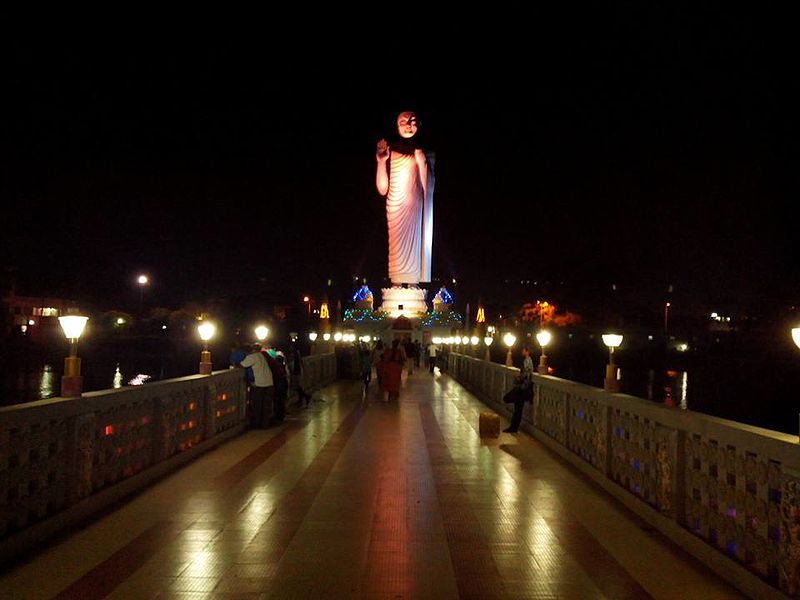 Some of the religious destinations include, Dwaraka Tirumala known with the name as Chinna Tirumala, Pancharama Kshetras of Palacole and Bhimavaram etc. Other destinatins of tourism importance are Perupalem Beach at Narasapuram, the Kolleru Lake being the largest fresh water in the country and a bird sanctuary, Dowleswaram Barrage and Godavari river etc.

The district has four revenue divisions, namely Eluru, Jangareddigudem, Kovvur, and Narasapuram. These revenue divisions are divided into 48 mandals in the district. These 46 mandals consists of 881 villages, 1 municipal corporation, 7 municipalities and 5 census towns. Eluru is the only municipal corporation, 7 municipalities include, Kovvur, Narasapuram, Nidadavolu, Palakol, Tadepalligudem, Tanuku, Bhimavaram and the 5 census towns are Dwarakatirumala, Sanivarapupeta, Satrampadu, Gavaravaram and Tangellamudi.

The Assembly constituencies are:

The district relies mostly on public transport such as, buses of APSRTC operating from all parts of the district. Most of the major highways and national highways pass through major towns in the district such as, AH 45, NH-16, NH-214A. South Central Railway division of Indian Railways operates many passenger and freight transport. Howrah-Chennai main line, Vijayawada–Nidadavolu loop line, Bhimavaram-Nidadavolu section, Bhimavaram–Narasapuram branch lines are the major lines and sections that provide rail connectivity in the district.

There are no air transport in the district, but has water transport. National Waterway 4 passes through the district and connects Vijayawada with Kakinada via Eluru canal. It has access to Bay of Bengal at Narsapuram.